From the Association of American Railroads (AAR): AAR Reports Mixed Annual and Monthly Traffic for December

The Association of American Railroads (AAR) today reported mixed 2012 rail traffic compared with 2011. U.S. rail intermodal volume totaled 12.3 million containers and trailers in 2012, up 3.2 percent or 374,918 units, over 2011. Carloads totaled 14.7 million in 2012, down 3.1 percent or 476,322 carloads, from 2011. Intermodal volume in 2012 was the second highest on record, down 0.1 percent or 14,885 containers and trailers, from the record high totals of 2006.
…
“Coal and grain typically account for around half of U.S. rail carloads, so when they’re down, chances are good that overall rail carloads are down too, as we saw in 2012,” said AAR Senior Vice President John T. Gray. “That said, a number of key rail carload categories showed solid improvement in 2012, including categories like autos and lumber that are most highly correlated with economic growth. Meanwhile, intermodal just missed setting a new volume record in 2012.”
emphasis added 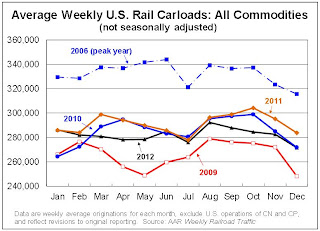 Note that building related commodities were up.

The second graph is for intermodal traffic (using intermodal or shipping containers): 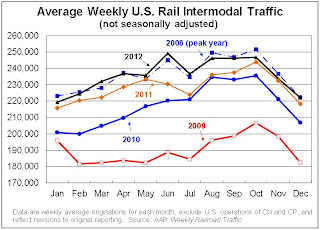 Intermodal will probably set a new record in 2013.