The Census Bureau released the Housing Vacancies and Homeownership report for Q4 2012 this morning.

This report is frequently mentioned by analysts and the media to track the homeownership rate, and the homeowner and rental vacancy rates.  However, there are serious questions about the accuracy of this survey.  Note: I expect housing economist Tom Lawler to send me some comments on this today.

This survey might show the trend, but I wouldn’t rely on the absolute numbers.  The Census Bureau is investigating the differences between the HVS, ACS and decennial Census, and analysts probably shouldn’t use the HVS to estimate the excess vacant supply, or rely on the homeownership rate, except as a guide to the trend. 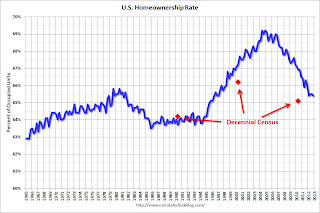 I’d put more weight on the decennial Census numbers and that suggests the actual homeownership rate is probably in the 64% to 65% range. 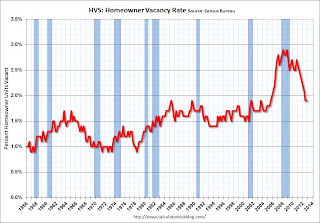 The HVS homeowner vacancy rate was unchanged at 1.9% in Q4. This is the lowest level since 2005 for this report.

The homeowner vacancy rate has peaked and is now declining, although it isn’t really clear what this means. Are these homes becoming rentals? Anyway – once again – this probably shows that the trend is down, but I wouldn’t rely on the absolute numbers. 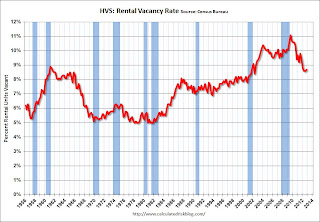 The quarterly HVS is the most timely survey on households, but there are many questions about the accuracy of this survey. Unfortunately many analysts still use this survey to estimate the excess vacant supply. However this does suggest that the housing vacancy rates have declined sharply.