CR Note: This is wonkish, but important for those using the HVS. An excerpt from economist Tom Lawler: Housing Vacancy Survey: Vacancy Rates “Mixed” on Quarter, Down from Year Ago; Reported Homeownership Rate Lowest Since 1996 (and “True” Homeownership Even Lower!)
The Census Bureau released the “Residential Vacancies and Homeownership” Report for Q4/2012, which is based on the “Housing Vacancy Survey” supplement to the Current Population Survey. The HVS results have not been consistent with the results from the last two decennial Censuses, with the HVS significantly overstating housing vacancy rates and homeownership rates – with the HVS/Census “gap” growing from 2000 to 2010.
According to the Q4 HVS results, the US rental vacancy rate last quarter was 8.7%, up from 8.6% in the previous quarter but down from 9.4% in Q4/11; the HVS homeowner vacancy rate last quarter ws 1.9%, unchanged from the previous quarter but down from 2.3% in Q4/11; and the US homeownership rate last quarter was 65.4%, down from 65.5% in the previous quarter and 66.0% in Q4/11. Last quarter’s HVS-based homeownership rate estimate was the lowest for a fourth quarter since 1996, and the “actual” homeownership rate last quarter was almost certainly lower.
As highlighted in the “sources and accuracy” page of the CPS/HVS, the HVS results for many key measures vary dramatically from decennial Census results.
Click Here for Table
While it is generally agreed that the HVS does not provide an accurate picture of the US housing market, and Census analysts are “concerned” about the growing “gap” between the HVS and the decennial Census, to the best of my knowledge no work has been done on identifying whether the HVS inaccuracies are related to sampling errors, non-sampling errors, or both.
The HVS report includes “estimates” of the US housing stock by occupancy and vacancy status, but its estimates for the total housing stock are based on housing stock estimates from the Population Division of Census, which are “benchmarked” to decennial Census results. Stated another way, the HVS assumes that the decennial Census estimates of the housing stock are accurate, but also implicitly assumes that the decennial Census estimates of the number of occupied units – total and by tenure – and the number of vacant units – total and by vacancy status – are “bogus.”
Here is the table on the US housing stock from today’s HVS report. 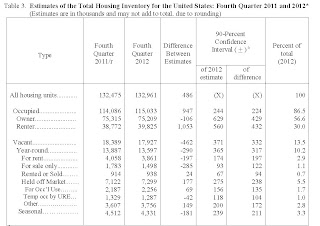 Click on table for larger image.
It is worth noting that the 90% confidence interval shown in the HVS report are measures of “sampling variability,” and assume that the sample used is an unbiased sample of the entire housing “universe.” Statistical comparisons between the HVS and the ACS reject the hypothesis that both surveys use unbiased samples from the same housing universe, while comparisons of the HVS and the decennial Census reject the hypothesis that the HVS estimates are unbiased estimates of housing vacancy and homeownership rates.
A recent study comparing the housing “universe” used for the 2010 ACS with that of the decennial Census revealed some startling (and troubling) differences in terms of both housing units omitted or erroneously excluded and (especially) “housing” unit erroneously included. The HVS sample almost certainly has even bigger “issues.”
The biggest apparent “bias” in the HVS is that it materially underestimates the number/share of the housing stock that is occupied by renters (and overstates the number/share of the housing stock that is vacant). I am not sure why.
…
Lawler concludes: The “true” US homeownership rate last quarter was probably the lowest since the mid-80’s.