From the National Restaurant Association: December RPI declines due to softer sales, traffic

Due in large part to softer same-store sales and customer traffic levels, the National Restaurant Association’s Restaurant Performance Index (RPI) declined in December. The RPI stood at 99.7 in December, down 0.2 percent from November, marking the third consecutive month in which the RPI stood below 100, which signifies contraction in the index of key industry indicators.
“Although restaurant operators reported softer same-store sales and customer traffic levels in December, they are cautiously optimistic about sales growth in the months ahead,” said Hudson Riehle, senior vice president of the Research and Knowledge Group for the Association. “However, operators remain decidedly pessimistic about the overall economy, with only 17 percent saying they expect business conditions to improve in the next six months.”
…
The Current Situation Index stood at 99.1 in December – down 0.7 percent from November and the lowest level in nearly two years. Although restaurant operators reported net positive same-store sales for the 19th consecutive month, December’s results were much softer than the November performance. 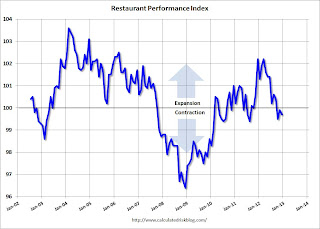 Click on graph for larger image.
The index declined to 99.7 in December, down from 99.9 in November (below 100 indicates contraction).
Restaurant spending is discretionary, so even though this is “D-list” data, I like to check it every month.
Earlier:
• Summary for Week Ending Feb 1st
• Schedule for Week of Feb 3rd