On the surface, it would appear so.

For years, he and other investing titans have espoused the importance of investing only in what you know and understand. He’s said it countless times in his Chairman’s Letters addressed to Berkshire Hathaway investors dating back decades.

It’s sound advice, no doubt. But is that the right message to send to American investors who have historically been reticent to not only look beyond their own borders for investment opportunities, but in some cases not beyond their own ‘backyards’?

U.S. companies make up less than half of the global market capitalization for equities. Yet if you delve into the portfolios of American investors, 80% of the shares they hold are in American public companies. Why is that?

• Cumbersome Trading: While a significant number of foreign stocks trade as American Depository Receipts (ADRs) in the U.S. and are easy to buy and sell, other premiere foreign companies are a headache to trade. Samsung Electronics is a perfect example. Not traded on any U.S. exchanges, the company only officially endorses one brokerage firm to place orders for American investors directly with traders in Seoul, South Korea. Trades must be conducted via telephone as there is no option that Samsung recommends for online orders.

• Familiarity Bias: Not only are U.S. investors reluctant to expose their portfolios to overseas investments, studies show that they will tend to ‘over invest’ in companies that are headquartered near where they reside. This ‘buy local’ phenomenon which was discussed in a study entitled “Individual Investors and Local Bias” in 2010 showed that investing in local public companies did not give investors any edge in performance. In fact, on average, it was a detriment to their returns.

• Stock Matching: Probably the biggest culprit to too much domestic equity exposure is company-matched contributions. It’s now common to see allocations of 50% or more in the public shares of the company in which an investor has employment. In some horribly undiversified cases, it’s the only stock an investor owns…

Whatever the reasons might be for Americans to shun foreign investments, overseas growth prospects are too attractive to ignore.

What kinds of returns lie off of our shores?

A lot has been written about the relative attractiveness of emerging market investments. ‘Relative’ is the key word since the markets do not offer flawless, low-risk investments, but they represent growth opportunities that are generally much more attractive than keeping assets strictly stateside.

Let’s face it. A lot of countries are in a better position to grow economically than is the United States. The 2012 top-ranked countries in terms of annual G D P growth are presented below. The United States was outside the top 100 at 2.21%. 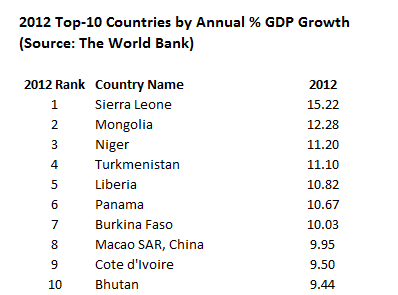 What makes the U.S. relatively unattractive from a growth perspective is its declining birth rate, the size of the retirement-age population, lengthening lifespans, and a smaller population of peak-wage earners. This is the curse of becoming a developed country, and with it comes prospects of low-single digit G D P growth. But not all countries have the same demographic makeup as the United States. Take Egypt. It has a much more attractive demographic makeup than the U.S. with a much higher percentage of its population being of a younger age and actively contributing to its economic growth. Below are projections for 2025: 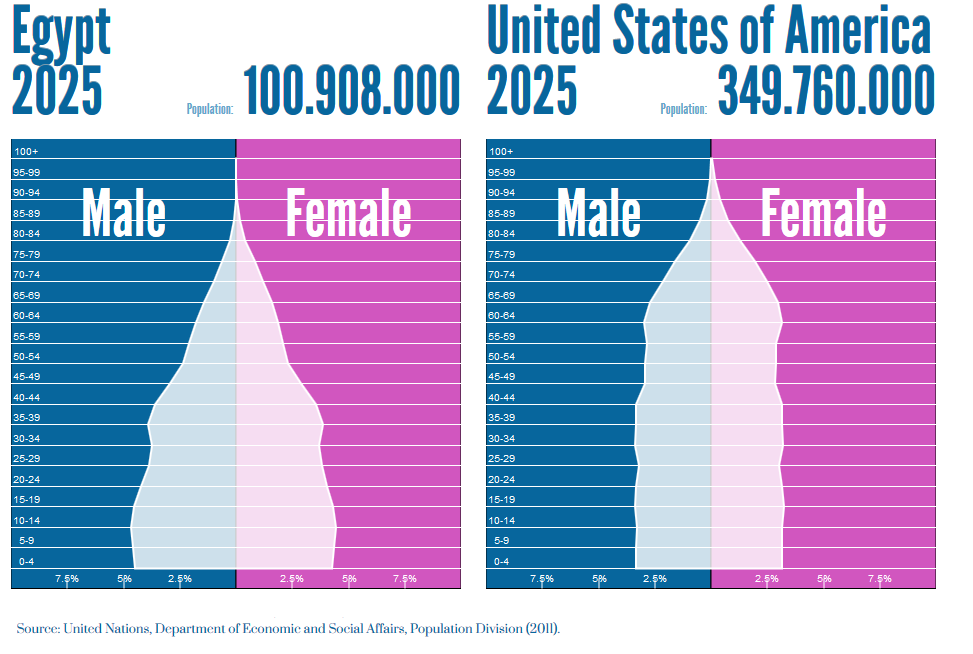 Of course, the same group of young people who will help the country’s economy have been demonstrating in the streets against President Morsi, hurting tourism. Such are the real risks of emerging markets…

But the interesting thing about Egypt in particular is that its G D P growth for 2012 was exactly the same as the United States at 2.21%. Markets look far ahead, though, and see Egypt’s relative merits. That’s why it was Market Vectors top performing International equity ETF for 2012 despite the country’s lowly G D P growth at the time.

The BRIC investment idea – Brazil, Russia, India, and China – is largely played out, so blanket investment in those countries is no longer as attractive as it was, despite their still-strong G D P growth.

Investors should look toward countries that are poised for growth over the next several decades, and if ‘backyard’ investing is truly necessary, Mexico is looking very attractive.

Mexico’s economic activity pushes the peso higher on the headlines

The State of Traditional Income Investments and the Alternatives to Consider

Why Oil Won’t Trade Above $100 This Year

Steel Dynamics downgraded to Neutral from Buy at Goldman Sachs

Iovance Biotherapeutics upgraded to Overweight from Neutral at Piper Sandler