Mortgage applications decreased 5.9 percent from one week earlier, according to data from the Mortgage Bankers Association’s (MBA) Weekly Mortgage Applications Survey for the week ending April 25, 2014. …

“Both purchase and refinance application activity fell last week, and the market composite index is at its lowest level since December 2000,” said Mike Fratantoni, MBA’s Chief Economist. “Purchase applications decreased 4 percent over the week, and were 21 percent lower than a year ago. Refinance activity also continued to slide despite a 30-year fixed rate that was unchanged from the previous week. The refinance index dropped 7 percent to the lowest level since 2008, continuing the declining trend that we have seen since May 2013.”
…
The average contract interest rate for 30-year fixed-rate mortgages with conforming loan balances ($417,000 or less) remained unchanged at 4.49 percent, with points decreasing to 0.38 from 0.50 (including the origination fee) for 80 percent loan-to-value ratio (LTV) loans.
emphasis added 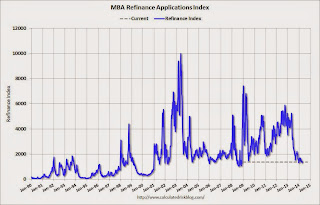 With the mortgage rate increases, refinance activity will be very low this year. 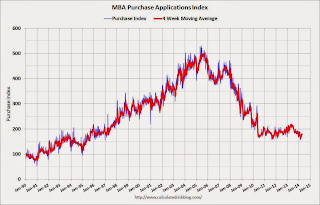 The 4-week average of the purchase index is now down about 19% from a year ago.

Japan Output and New Orders Decline at Fastest Pace Since 2012; Abenomics in Review