There were no special factors impacting this week’s initial claims.

The following graph shows the 4-week moving average of weekly claims since January 2000. 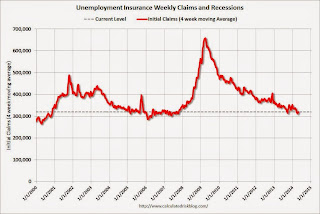 The dashed line on the graph is the current 4-week average. The four-week average of weekly unemployment claims increased to 320,000.

This was above the consensus forecast of 320,000.  Even with the increase, the 4-week average is close to normal levels for an expansion.