The Department of Transportation (DOT) reported:

Travel for the month is estimated to be 254.9 billion vehicle miles. 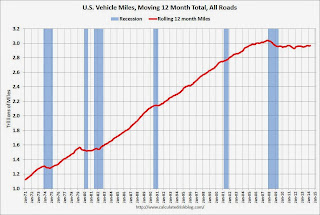 In the early ’80s, miles driven (rolling 12 months) stayed below the previous peak for 39 months.

The second graph shows the year-over-year change from the same month in the previous year. 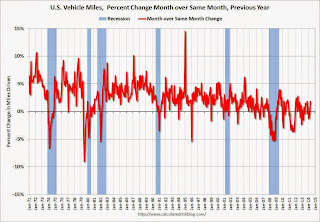 Of course gasoline prices are just part of the story.  The lack of growth in miles driven over the last 6+ years is probably also due to the lingering effects of the great recession (high unemployment rate and lack of wage growth), the aging of the overall population (over 55 drivers drive fewer miles) and changing driving habits of young drivers.

With all these factors, it might take a few more years before we see a new peak in miles driven.