The BEA released the Personal Income and Outlays report for May:

The following graph shows real Personal Consumption Expenditures (PCE) through May 2014 (2009 dollars). Note that the y-axis doesn’t start at zero to better show the change. 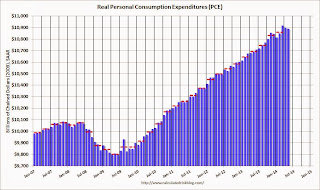 Note: Usually the two-month and mid-month methods can be used to estimate PCE growth for the quarter (using the first two months and mid-month of the quarter). However this isn’t very effective if there was an “event”, and in Q1 PCE was especially weak in January and February – and then surged in March.

Why Kellogg Is Not A Real Value Stock