This week’s S&P/Case-Shiller Home Price Report for June 2014 contained two data “surprises.” The first was that the SPCS “National” HPI, previously released only quarterly, will now be published on a monthly basis. The second, and much more dramatic, surprise was that the historical data for the SPCS “National” HPI was revised substantially. Here is a table showing growth rates in the previously-published National HPI and the revised National HPI over selected periods, using not seasonally adjusted data. 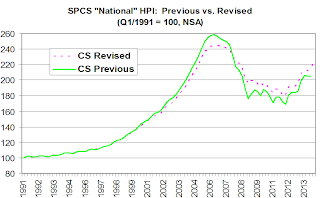 The catalyst for this revision appears to a change in the sources of sales transactions data to sources used by CoreLogic, which “bought” the SPCS HPIs last year. Here is an excerpt from a July 2014 “methodology” report.

“The sources for sale transaction data were changed to sources used by CoreLogic, Inc. beginning with the March 2014 update of the S&P/Case-Shiller indices. Since the repeat sale pair samples collected from CoreLogic sources are not identical to samples collected from prior sources1, divisors are used to prevent any breaks in the index series. The divisors applied to index points estimated for March 2014 and all months afterward are listed below. The divisors are calculated by calculating the index value for February, 2014 with the old data source and the new data source separately. If we assume that the change in the data source increases the index level for February 2014 by 5%. Then the divisor is set to 1.05 and the index based on the new data source is divided by 1.05 for March 2014 and all subsequent months. This prevents a jump in the index and preserves the month-to-month percentage changes.”

While this paragraph appears to be related to the construction of the 20 metro area HPIs, I’m assuming that new CoreLogic data sources were used to construct revised national HPIs.

A Bloomberg article picked up on these revisions, though Case-Shiller principal economist David Stiff’s “explanation” in that article seemed incomplete. According to article Stiff said that “the index only looks different because it’s been rebuilt with new, higher quality data.” He also said that “CoreLogic’s data allowed Case-Shiller to weed out more bank repossessions,” implying that the major source of the revisions was that Case-Shiller’s HPI previously erroneously included non-arms-length transactions such as bank repossessions.

It seems highly unlikely, however, that this factor was the major reason for revisions in the national HPI. First, there were no similar revisions in pre-2014 data for the HPIs for the 20 metro areas SPCS publishes. Second, the new national HPI grew by seven percentage points less than the previous national HPI from Q2/2000 to Q2/2006, when distressed transactions were de minimis. 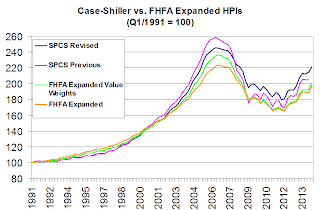 The “new” SPCS “National” HPI now looks much more similar to the FHFA Expanded Dataset HPI, once the latter is adjusted (albeit crudely) to be market-value weighted instead of housing unit weighted (SPCS is value weighted). If one were to construct a FHFA “National” HPI by applying Census 2000 market value weights to each FHFA State HPI, here is what it would look like relative to the previous and revised SPCS National HPI.

Records Are Made To Be Broken