This is an update to a previous post through August.

Earlier this year, I posted some demographic data for the U.S., see: Census Bureau: Largest 5-year Population Cohort is now the “20 to 24” Age Group and The Future is still Bright!

I pointed out that “even without the financial crisis we would have expected some slowdown in growth this decade (just based on demographics). The good news is that will change soon.”

Changes in demographics are an important determinant of economic growth, and although most people focus on the aging of the “baby boomer” generation, the movement of younger cohorts into the prime working age is another key story in coming years. Here is a graph of the prime working age population (this is population, not the labor force) from 1948 through August 2014. 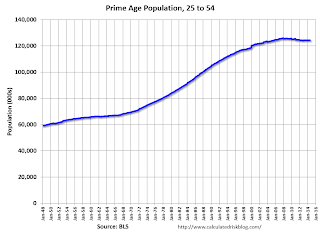 So when we compare economic growth to the ’70s, ’80, or 90’s we have to remember this difference in demographics (the ’60s saw solid economic growth as near-prime age groups increased sharply).

The prime working age population peaked in 2007, and appears to have bottomed at the end of 2012.  The good news is the prime working age group has started to grow again, and should be growing solidly by 2020 – and this should boost economic activity in the years ahead.

The “Allocation Matters Most Hypothesis”