By request, here is an update on an earlier post through the August employment report.

Important: There are many differences between these periods. Overall employment was smaller in the ’80s, so a different comparison might be to look at the percentage change.   Of course the participation rate was increasing in the ’80s (younger population and women joining the labor force), and the participation rate is generally declining now.  But these graphs give an overview of employment changes.

First, here is a table for private sector jobs. The top two private sector terms were both under President Clinton.  Reagan’s 2nd term saw about the same job growth as during Carter’s term. Note: There was a severe recession at the beginning of Reagan’s first term (when Volcker raised rates to slow inflation) and a recession near the end of Carter’s term (gas prices increased sharply and there was an oil embargo).

The first graph shows the change in private sector payroll jobs from when each president took office until the end of their term(s). President George H.W. Bush only served one term, and President Obama is in the second year of his second term.

There was a recession towards the end of President G.H.W. Bush (purple) term, and Mr Clinton (light blue) served for eight years without a recession. 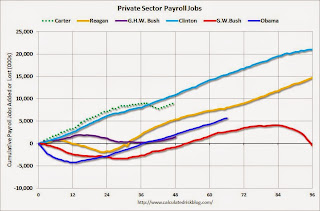 The first graph is for private employment only. 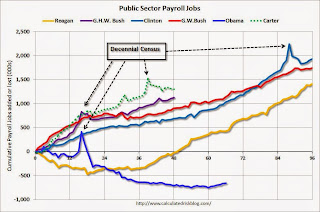 However the public sector has declined significantly since Mr. Obama took office (down 682,000 jobs). These job losses have mostly been at the state and local level, but more recently at the Federal level.  This has been a significant drag on overall employment.

Looking forward, I expect the economy to continue to expand for the next few years, so I don’t expect a sharp decline in private employment as happened at the end of Mr. Bush’s 2nd term (In 2005 and 2006 I was warning of a coming recession due to the bursting of the housing bubble).

A big question is when the public sector layoffs will end.  The cutbacks are clearly over at the state and local levels in the aggregate, and it appears cutbacks at the Federal level have slowed.  Right now I’m expecting some increase in public employment in 2014, but nothing like what happened during Reagan’s second term.

The China Boom Story: Alibaba and the 40 Thieves