On a monthly basis, retail sales increased 0.6% from July to August (seasonally adjusted), and sales were up 5.0% from August 2013. Sales in July were revised up to a 0.3% increase from unchanged.  Sales in June were also revised up.

From the Census Bureau report:

The U.S. Census Bureau announced today that advance estimates of U.S. retail and food services sales for August, adjusted for seasonal variation and holiday and trading-day differences, but not for price changes, were $444.4 billion, an increase of 0.6 percent from the previous month, and 5.0 percent (±0.9%) above August 2013. … The June to July 2014 percent change was revised from virtually unchanged to 0.3 percent. 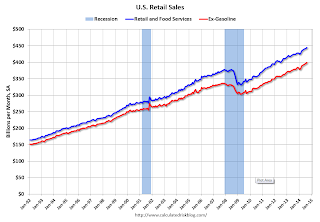 This graph shows retail sales since 1992. This is monthly retail sales and food service, seasonally adjusted (total and ex-gasoline).

The second graph shows the year-over-year change in retail sales and food service (ex-gasoline) since 1993. 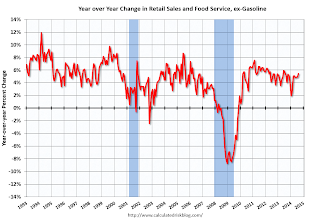 The increase in August was above consensus expectations of a 0.4% increase.

Including the upward revisions to June and July, this was a strong report.

Homebuilder Sector Completes the Death Cross: “This is Going to Turn into a Bloodbath”