The key economic report this week is August housing starts on Thursday.

For manufacturing, the August Industrial Production and Capacity Utilization report, and the September NY Fed (Empire State) and Philly Fed manufacturing surveys, will be released this week.

For prices, PPI will be released Tuesday, and CPI on Wednesday.

The FOMC meets on Tuesday and Wednesday, and the FOMC is expected to taper QE3 asset purchases another $10 billion per month at this meeting.

8:30 AM: NY Fed Empire Manufacturing Survey for September. The consensus is for a reading of 16.0, up from 14.7 in August (above zero is expansion). 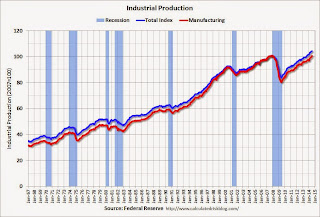 9:15 AM: The Fed will release Industrial Production and Capacity Utilization for August.

This graph shows industrial production since 1967.

The consensus is for a 0.3% increase in Industrial Production, and for Capacity Utilization to increase to 79.3%.

7:00 AM: The Mortgage Bankers Association (MBA) will release the results for the mortgage purchase applications index.

8:30 AM: Consumer Price Index for August. The consensus is for no change in CPI in August and for core CPI to increase 0.2%.

10:00 AM: The September NAHB homebuilder survey. The consensus is for a reading of 56, up from 55 in August.  Any number above 50 indicates that more builders view sales conditions as good than poor.

2:00 PM: FOMC Forecasts This will include the Federal Open Market Committee (FOMC) participants’ projections of the appropriate target federal funds rate along with the quarterly economic projections.

8:30 AM: The initial weekly unemployment claims report will be released. The consensus is for claims to decrease to 305 thousand from 315 thousand. 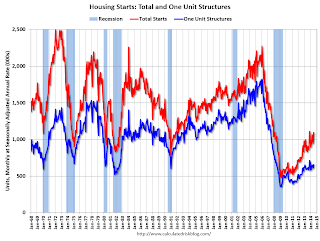 The consensus is for total housing starts to decrease to 1.040 million (SAAR) in August.

8:45 AM: Speech by Fed Chair Janet Yellen, The Importance of Asset Building for Low and Middle Income Households, At the Corporation for Enterprise Development’s 2014 Assets Learning Conference, Washington, D.C. (via prerecorded video)

10:00 AM: the Philly Fed manufacturing survey for September. The consensus is for a reading of 22.0, down from 28.0 last month (above zero indicates expansion).

“Each year, the Current Employment Statistics (CES) survey estimates are benchmarked to comprehensive counts of employment from the Quarterly Census of Employment and Wages (QCEW) for the month of March. These counts are derived from state unemployment insurance (UI) tax records that nearly all employers are required to file. … The final benchmark revision will be issued with the publication of the January 2015 Employment Situation news release in February.”

12:00 PM: Q2 Flow of Funds Accounts of the United States from the Federal Reserve.

10:00 AM: Regional and State Employment and Unemployment (Monthly) for August 2014