Just an update … during the recession, I wrote about the troubles in Las Vegas and included a chart of visitor and convention attendance: Lost Vegas.

Convention attendance in 2013 was still about 18% below the peak level in 2006.  Here is the data from the Las Vegas Convention and Visitors Authority. 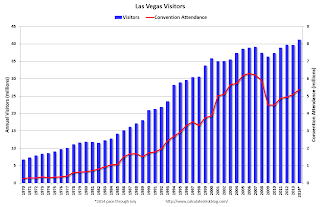 Convention traffic is up 5.4% from last year, but is still way below the pre-recession peak – although I wonder if the previous convention peak was related to “How to Flip a House” and “How to Buy with no money” type conventions!

In general, the gamblers are back – and the conventions are returning.