Notes: This CoreLogic House Price Index report is for August. The recent Case-Shiller index release was for July. The CoreLogic HPI is a three month weighted average and is not seasonally adjusted (NSA).

“The pace of year-over-year appreciation continues to slow down as real estate markets find more balance. Home price appreciation reached a peak of almost 12 percent year-over-year in October 2013 and has since subsided to the current pace of 6 percent,” said Mark Fleming, chief economist at CoreLogic. “Continued moderation of home price appreciation is a welcomed sign of more balanced real estate markets and less pressure on affordability for potential home buyers in the near future.”
emphasis added 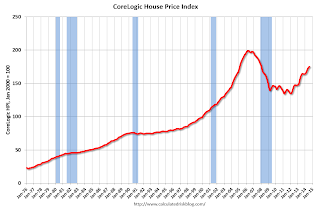 This index is not seasonally adjusted, and the index will probably turn negative month-to-month in September. 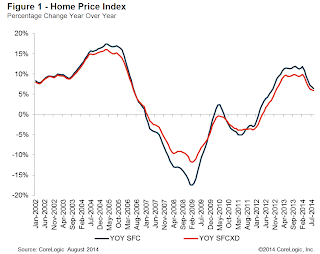 The second graph is from CoreLogic. The year-over-year comparison has been positive for thirty consecutive months suggesting house prices bottomed early in 2012 on a national basis (the bump in 2010 was related to the tax credit).

The YoY increases continue to slow.

Silver “Particularly Cheap” as “Blood On The Commodity Streets”