We all know the ‘three strikes and you’re out’ rule. Historic data (based on the 1987, 2000 and 2007 tops) strongly suggests that every bull market also follows the three strikes rule. This bull is one strike away from being over and out.

“Dead man walking” is an expression used by prison guards as the condemned were led to their execution.  Is the stock market a ‘dead bull walking’?

I asked that question back in February right after completing my 2014 S&P 500 forecast.

At the time there was no sign of a major top yet, but since no bull market goes on forever, I published a 3-step quick guide on how to discern a dying bull market (or the formation of a major market top).

Based on historic data, a bull market dies in three stages:

3 Stages of A ‘Dying’ Bull Market

Back in February the S&P 500 was in stage 1. It was basically graying around the temples, but still a safe distance away from the coffin.

Here’s the pulse of today’s market: 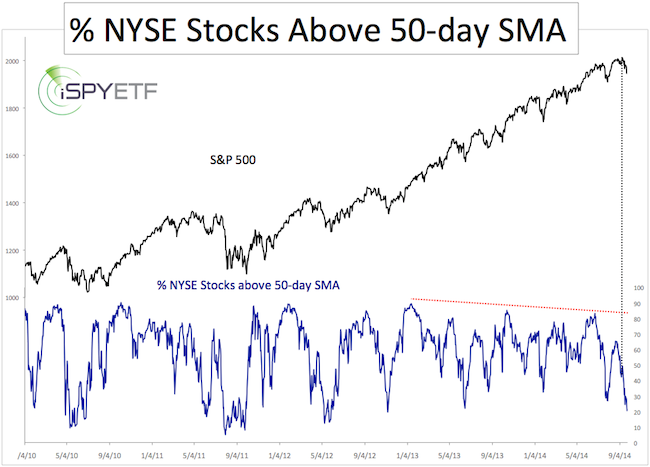 The ratio shows just how badly small caps lag behind large caps, but it also shows why this is only stage 2 of 3 of a dying bull market: Despite small cap weakness, the S&P 500 is still trading near its high. 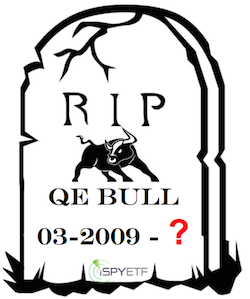 This gradual shift takes many months and may still deliver sizeable gains and even blow off frenzies.

Nevertheless, the internal deterioration of stage 3 divergences are terminal.

Being familiar with the three stages of a dying bull market protects investors against turning bearish too soon. Premature bears leave money on the table and/or lose their pants going short.

My favorite ‘third stage indicator’ correctly foreshadowed the 1987, 2000 and 2007 bear markets. It also telegraphed that any correction since 2010 was to be followed by new bull market highs.

This indicator currently shows a fledgling multi-week divergence, which – if not reversed – may have put an expiration date on this bull market.

A detailed look at this historically accurate ‘third stage indicator’ is available here:

The Missing Ingredient for a Major Bull Market Top 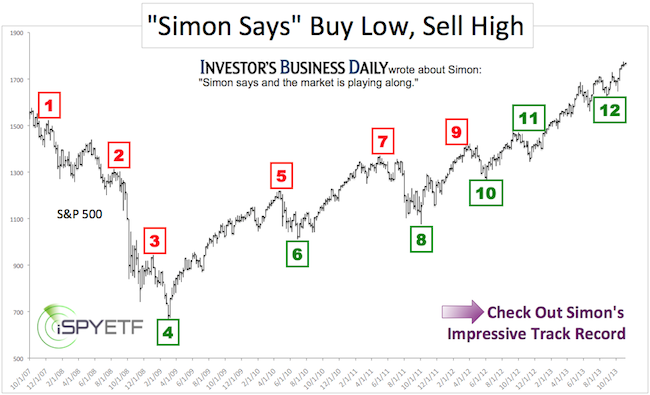 This is How Police Justify Stealing American Citizens’ Money