Currencies of most emerging economies rallied against the dollar today, as expectations for the first rate hike in the US shift out to a year from now. There was one major exception – the Russian ruble. 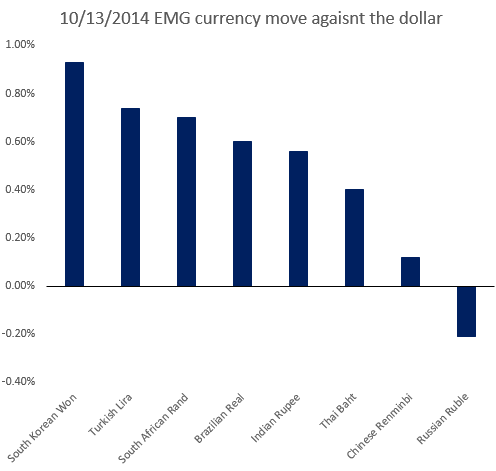 Russia is facing stagflation while the central bank remains helpless. A number of relatively well-off Russian citizens – some after getting burned in Cyprus – have been trying to abandon the ruble.

WSJ: – “Those who have any savings have lost all illusions about the ruble and are trying to protect their money,” said a senior executive at one of Russia’s largest banks, speaking on condition of anonymity.

Her bank has seen clients buying tens and hundreds of thousands of dollars in recent days and storing the funds in cash in safe-deposit boxes for fear that sanctions, possible capital controls or bank failures could limit their ability to access money kept on account. That is while dollar-starved Russian banks are offering rates on dollar and euro deposits as high as 4.5% for one-year certificates of deposit.

The ongoing rout in crude oil is expected to strain Russia’s fiscal and trade balances. Russia (similar to some other energy producers) failed to diversify its economy and is now paying the price. According to Bloomberg, “Russia’s central bank intervened in the past 10 days to stabilize the currency, central bank Governor Elvira Nabiullina told lawmakers in Moscow today.” In spite of spending some $6bn in FX reserves, it failed. The ruble hit a record low against the euro over the past few days as capital outflows continue.

Sign up for our daily newsletter called the Daily Shot. It’s a quick graphical summary of topics covered here and on Twitter (see overview). Emails are distributed via Freelists.org and are NEVER sold or otherwise shared with anyone.