Yesterday I was a guest on Bloomberg’s What’d You Miss? talking about housing. One of the earlier guests was Professor J.W. Mason discussing the labor force participation rate (LFPR).

Professor Mason argued that most of the decline in the LFPR is cyclical.

I’ve written extensively about the LFPR, and I’ve argued that most of the decline is due to ongoing trends and demographics.

Dr. Mason said that if you looked at each age group by sex, you could construct an “adjusted” LFPR. He presented the following graph: 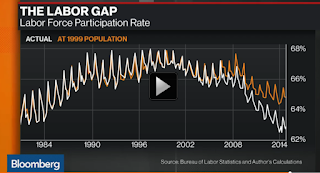 NOTE: I believe this approach is incorrect.

This graph from Bloomberg shows the BLS reported LFPR and an “adjusted” LFPR using the 1999 LFPR for each age group and gender – and the current population for each group.

As an example, if we look at men in the 40 to 44 age group (these are my calculations using Dr. Mason’s method):

This is the approach that Dr. Mason used to construct the above graph – and this is incomplete and I believe his conclusion is incorrect.

Here is a look at the trend for 40 to 44 year old men (BLS data, only available Not Seasonally Adjusted since 1976). 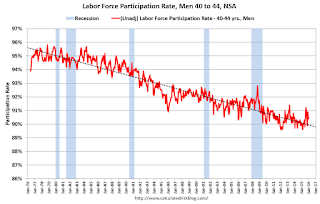 This graph shows the 40 to 44 year old men participation rate since 1976 (note the scale doesn’t start at zero to better show the change).

There is a clear downward trend, and a researcher looking at this trend in the year 2000 might have predicted the 40 to 44 year old men participation rate would be about the level as today (see trend line).

Clearly there are other factors than “economic weakness” causing this downward trend.   I listed some reasons a couple of years ago, and newer research from Pew Research suggests stay-at-home dads is one of the reasons: Growing Number of Dads Home with the Kids

Just looking at this graph, I don’t think there are many 40 to 44 year old men that will be returning to the labor force – and a careful analysis of each age group by sex shows few “missing workers”.

If Dr. Mason had used this trend line for 40 to 44 year old men – instead of the 1999 participation rate – the number of missing workers would be close to zero.

The bottom line is most of the decline in the Labor Force Participation rate is due to ongoing trends (as above) and demographics – and is not cyclical.

Was Antonin Scalia Removed by the Ruling Elite for Fighting Their Agenda?