The December Case-Shiller indices grew at a pace in line with prior months, with all three headline indices showing annual appreciation above 5 percent per year. Zillow expects all three January Case-Shiller indices to show slower growth, with the 10-City Composite Index expected to register sub-5 percent annual growth for the first time in months.

The January Case-Shiller National Index is expected to gain another 0.6 percent in January from December, down from 0.8 percent growth in December from November. We expect the 10-City Index to grow 4.9 percent year-over-year, and the 20-City Index to grow 5.6 percent over the same period. The National Index looks set to begin 2016 up 5.6 percent year-over-year, the only instance in which monthly or annual growth next month is expected to surpass this month’s pace.

All SPCS forecasts are shown in the table below. These forecasts are based on [the] December Case-Shiller data release and the January 2016 Zillow Home Value Index (ZHVI), also released [last week]. The January Case-Shiller Composite Home Price Indices will not be officially released until Tuesday, March 29.

Although the 10-city and 20-city indexes will probably show modestly slower growth, this suggests the year-over-year change for the Case-Shiller National index will be slightly higher in January than in the December report. 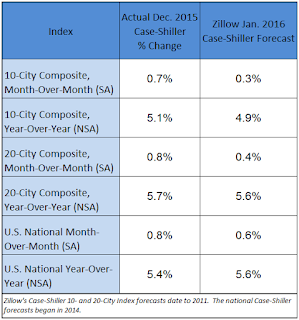 Sprott’s Thoughts On Precious Metals – Another Fake Out or Actual Breakout?