The January ISM Non-manufacturing index was at 53.4%, down from 53.5% in January. The employment index decreased in February to 49.7%, down from 52.1% in January. Note: Above 50 indicates expansion, below 50 contraction.

From the Institute for Supply Management: February 2016 Non-Manufacturing ISM Report On Business®

Economic activity in the non-manufacturing sector grew in February for the 73rd consecutive month, say the nation’s purchasing and supply executives in the latest Non-Manufacturing ISM® Report On Business®.

The report was issued today by Anthony Nieves, CPSM, C.P.M., CFPM, chair of the Institute for Supply Management® (ISM®) Non-Manufacturing Business Survey Committee. “The NMI® registered 53.4 percent in February, 0.1 percentage point lower than the January reading of 53.5 percent. This represents continued growth in the non-manufacturing sector at a slightly slower rate. The Non-Manufacturing Business Activity Index increased to 57.8 percent, 3.9 percentage points higher than the January reading of 53.9 percent, reflecting growth for the 79th consecutive month at a faster rate. The New Orders Index registered 55.5 percent, 1 percentage point lower than the reading of 56.5 percent in January. The Employment Index decreased 2.4 percentage points to 49.7 percent from the January reading of 52.1 percent and indicates contraction after 23 consecutive months of growth. This is the first time the employment index has contracted since February 2014. The Prices Index decreased 0.9 percentage point from the January reading of 46.4 percent to 45.5 percent, indicating prices decreased in February for the fourth time in the last six months. According to the NMI®, 14 non-manufacturing industries reported growth in February. The majority of the respondents’ comments continue to be positive about business conditions. The respondents are projecting a slight optimism in regards to the overall economy. There is an increase in the number of industries reflecting growth in both New Orders and Business Activity; however, the NMI® has decreased slightly due to the contraction in the Employment index.”
emphasis added 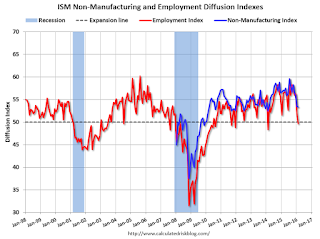 This was above the consensus forecast of 53.1, however suggests slower expansion in February than in January.

The Entire System is Rigged Against Your Prosperity

New entry in the Europe portfolio

Investors trade cautiously on the LSE ahead of job data

Asana downgraded to Neutral from Overweight at Piper Sandler