Earlier today, the Census Bureau reported that overall construction spending was “nearly the same” as in June:

The U.S. Census Bureau of the Department of Commerce announced today that construction spending during July 2016 was estimated at a seasonally adjusted annual rate of $1,153.2 billion, nearly the same as the revised June estimate of $1,153.5 billion. The July figure is 1.5 percent above the July 2015 estimate of $1,135.9 billion.

Spending on private construction was at a seasonally adjusted annual rate of $875.0 billion, 1.0 percent above the revised June estimate of $866.5 billion. … 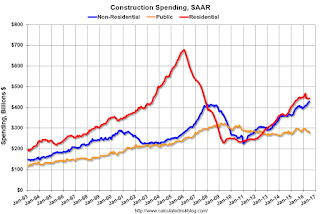 Residential and public spending have slumped a little recently.

Private residential spending has been generally increasing, but is 34% below the bubble peak.

Non-residential spending is now 3.6% the peak in January 2008 (nominal dollars).

Public construction spending is now 15% below the peak in March 2009. 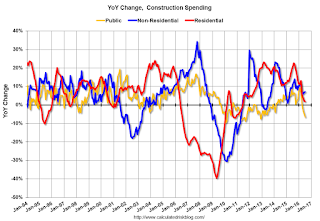 The second graph shows the year-over-year change in construction spending.

Looking forward, all categories of construction spending should increase in 2016. Residential spending is still fairly low, non-residential is increasing, and public spending is also generally increasing after several years of austerity.

This was well below the consensus forecast of a 0.6% increase for July, however construction spending for the previous two months were revised up.

3 Bitcoin Market Crises Every Bitcoin Investor Should Know About