Inventory remains a key issue. Here is a repeat of two paragraphs I wrote about inventory a few months ago:

Two of the key reasons inventory is low: 1) A large number of single family home and condos were converted to rental units. Last year, housing economist Tom Lawler estimated there were 17.5 million renter occupied single family homes in the U.S., up from 10.7 million in 2000. Many of these houses were purchased by investors, and rents have increased substantially, and the investors are not selling (even though prices have increased too). Most of these rental conversions were at the lower end, and that is limiting the supply for first time buyers. 2) Baby boomers are aging in place (people tend to downsize when they are 75 or 80, in another 10 to 20 years for the boomers). Instead we are seeing a surge in home improvement spending, and this is also limiting supply.

Of course low inventory keeps potential move-up buyers from selling too.  If someone looks around for another home, and inventory is lean, they may decide to just stay and upgrade.

A key point: Some areas are seeing more inventory.   For example, there is more inventory in some coastal areas of California, in New York city and for high rise condos in Miami. 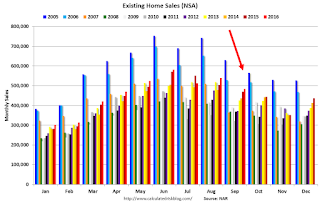 Sales NSA in September (red column) were the highest for September since 2006 (NSA).

Note that sales NSA are in the slower Fall period, and will really slow seasonally in January and February.

19 days to go: When will Trump release his tax plan?