New home sales for June were reported at 610,000 on a seasonally adjusted annual rate basis (SAAR). This was close to the consensus forecast, however the three previous months were revised down. Still, overall, this was a decent report. 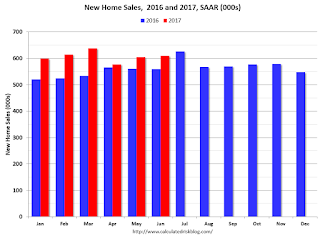 This graph shows new home sales for 2016 and 2017 by month (Seasonally Adjusted Annual Rate).  Sales were up 9.1% year-over-year in June.

This was a strong year-over-year increase through June, however sales were weak in Q1 last year, so this was a somewhat easy comparison.

And here is another update to the ”distressing gap” graph that I first started posting a number of years ago to show the emerging gap caused by distressed sales.  Now I’m looking for the gap to close over the next several years. 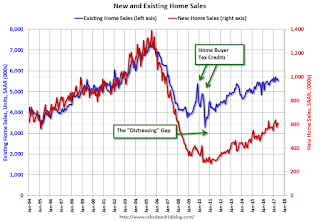 The “distressing gap” graph shows existing home sales (left axis) and new home sales (right axis) through June 2017. This graph starts in 1994, but the relationship had been fairly steady back to the ’60s.

Following the housing bubble and bust, the “distressing gap” appeared mostly because of distressed sales.   The gap has persisted even though distressed sales are down significantly, since new home builders focused on more expensive homes.

I expect existing home sales to move more sideways, and I expect this gap to slowly close, mostly from an increase in new home sales.

However, this assumes that the builders will offer some smaller, less expensive homes. If not, then the gap will persist. 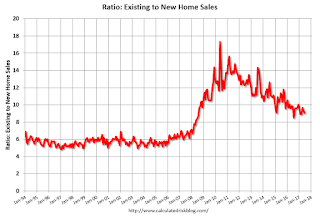 Another way to look at this is a ratio of existing to new home sales.

In general the ratio has been trending down since the housing bust, and this ratio will probably continue to trend down over the next several years.

UPST May Not Survive

Was That Killer Jobs Report A Head Fake?