The CMD’s latest Quarterly Report on Household Debt and Credit reveals that total household debt rose by $114 billion (0.9 percent) to $12.84 trillion in the second quarter of 2017. There were modest increases in mortgage, auto, and credit card debt (increasing by 0.7 percent, 2 percent, and 2.6 percent respectively), no change to student loan debt, and a decline in home equity lines of credit (which fell by 0.9 percent). Flows of credit card balances into both early and serious delinquencies climbed for the third straight quarter—a trend not seen since 2009.
emphasis added 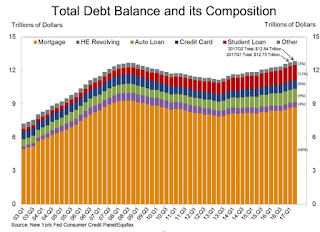 Here are two graphs from the report:

From the NY Fed:

Mortgage balances, the largest component of household debt, increased again during the first quarter. Mortgage balances shown on consumer credit reports on June 30 stood at $8.69 trillion, an increase of $64 billion from the first quarter of 2017. Balances on home equity lines of credit (HELOC) were roughly flat, and now stand at $452 billion. Non-housing balances were up in the second quarter. Auto loans grew by $23 billion and credit card balances increased by $20 billion, while student loan balances were roughly flat. 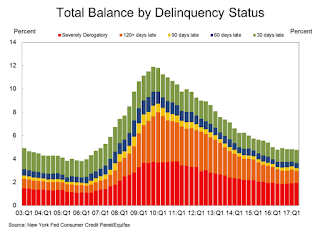 The overall delinquency rate was mostly unchanged in Q2.  From the NY Fed:

There is much more in the report.

Stocks Rebound as Fed Not Ready to Stop Stimulus