From the Census Bureau: Permits, Starts and Completions

Building Permits:
Privately‐owned housing units authorized by building permits in January were at a seasonally adjusted annual rate of 1,345,000. This is 1.4 percent above the revised December rate of 1,326,000, but is 1.5 percent below the January 2018 rate of 1,366,000. Single‐family authorizations in January were at a rate of 812,000; this is 2.1 percent below the revised December figure of 829,000. Authorizations of units in buildings with five units or more were at a rate of 482,000 in January.
emphasis added 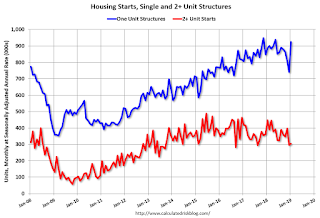 Multi-family is volatile month-to-month, and  has been mostly moving sideways the last few years.

Single-family starts (blue) increased in January, and were up 5% year-over-year. 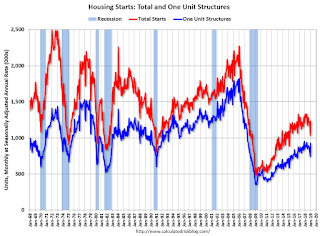 The second graph shows total and single unit starts since 1968.

The second graph shows the huge collapse following the housing bubble, and then eventual recovery (but still historically low).

Total housing starts in January were above expectations, however starts for November and December were revised down.

Frontfundr Has Commissioned A Survey to Understand Gender Parity In Personal Finance For Women, And The Results Aren’t Good