Total nonfarm payroll employment changed little in February (+20,000), and the unemployment rate declined to 3.8 percent, the U.S. Bureau of Labor Statistics reported today. Employment in professional and business services, health care, and wholesale trade continued to trend up, while construction employment decreased.
…
The change in total nonfarm payroll employment for December was revised up from +222,000 to +227,000, and the change for January was revised up from +304,000 to +311,000. With these revisions, employment gains in December and January combined were 12,000 more than previously reported.
…
In February, average hourly earnings for all employees on private nonfarm payrolls rose by 11 cents to $27.66, following a 2-cent gain in January. Over the year, average hourly earnings have increased by 3.4 percent.
emphasis added 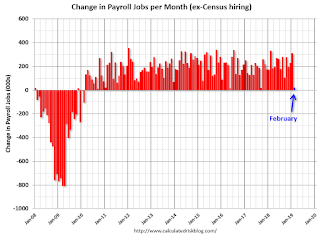 Payrolls for December and January were revised up 12 thousand combined. 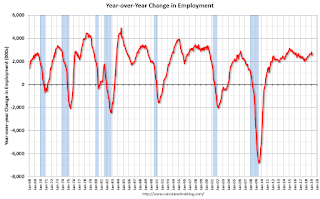 In February the year-over-year change was 2.509 million jobs. 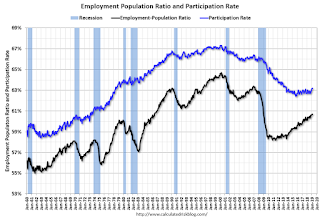 The Labor Force Participation Rate was unchanged in February to 63.2%. This is the percentage of the working age population in the labor force.   A large portion of the recent decline in the participation rate is due to demographics and long term trends.

The Employment-Population ratio was increased to 60.7% (black line). 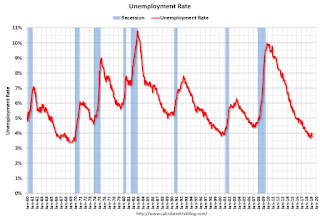 The unemployment rate decreased in February to 3.8%.  (Unwinding the bump up from the government shutdown).

This was well below the consensus expectations of 178,000 jobs added, however December and January were up by 12,000 combined.  A weak report.

Frontfundr Has Commissioned A Survey to Understand Gender Parity In Personal Finance For Women, And The Results Aren’t Good