On a monthly basis, retail sales decreased 0.2 percent from March to April (seasonally adjusted), and sales were up 3.1 percent from April 2018.

From the Census Bureau report:

Advance estimates of U.S. retail and food services sales for April 2019, adjusted for seasonal variation and holiday and trading-day differences, but not for price changes, were $513.4 billion, a decrease of 0.2 percent from the previous month, but 3.1 percent above April 2018. Total sales for the February 2019 through April 2019 period were up 3.0 percent from the same period a year ago. The February 2019 to March 2019 percent change was revised from up 1.6 percent to up 1.7 percent (±0.2 percent). 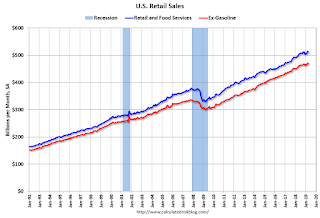 This graph shows retail sales since 1992. This is monthly retail sales and food service, seasonally adjusted (total and ex-gasoline).

Retail sales ex-gasoline were down 0.4% in April.

The second graph shows the year-over-year change in retail sales and food service (ex-gasoline) since 1993. 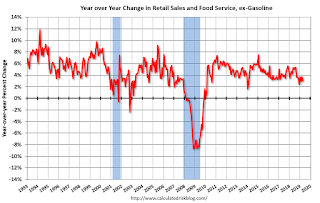 Retail and Food service sales, ex-gasoline, increased by 3.0% on a YoY basis.

The increase in April was well below expectations.  Sales in March were revised up, and sales in February were revised down.  A weak report.

Fly Intel: What to watch in Cisco’s earnings report

The Smart Money Are Looking At Cortexyme Inc