Update: Watching existing home "for sale" inventory is very helpful. As an example, the increase in inventory in late 2005 helped me call the top for housing.

And the decrease in inventory eventually helped me correctly call the bottom for house prices in early 2012, see: The Housing Bottom is Here.

And in 2015, it appeared the inventory build in several markets was ending, and that boosted price increases.

I don't have a crystal ball, but watching inventory helps understand the housing market.

Inventory, on a national basis, was unchanged year-over-year (YoY) in June.  That followed  ten consecutive months with a YoY increase.

The graph below shows the YoY change for non-contingent inventory in Houston, Las Vegas, and Sacramento and Phoenix (through July), and total existing home inventory as reported by the NAR (through June). 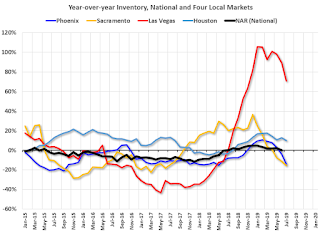 The black line is the year-over-year change in inventory as reported by the NAR.

Note that inventory was up 71% YoY in Las Vegas in July (red), the thirteenth consecutive month with a YoY increase.  But the YoY change is slowing.

Inventory is a key for the housing market.  Right now it appears the inventory build that started last year has ended.