"Chemical Activity Barometer Down in August"

Note: This appears to be a leading indicator for industrial production.

From the American Chemistry Council: Chemical Activity Barometer Down in August

The Chemical Activity Barometer (CAB), a leading economic indicator created by the American Chemistry Council (ACC), fell 0.1 percent in August on a three-month moving average (3MMA) basis following a similar drop in July and four months of gains. On a year-over-year (Y/Y) basis, the barometer was flat at 0.0 percent (3MMA).

The unadjusted measure of the CAB fell 0.5 percent in August after a 0.1 percent gain in July. The diffusion index was 59 percent in August. The diffusion index marks the number of positive contributors relative to the total number of indicators monitored. The CAB reading for July was revised upward by 0.58 points and that for June by 0.62 points.

“A pattern of fluctuating CAB readings – months up followed by months down – indicates late-cycle activity,” said Kevin Swift, chief economist at ACC. “The barometer signals gains in U.S. commerce into early 2020, but at a slow pace, while rising volatility suggests change may be coming.”
...
Applying the CAB back to 1912, it has been shown to provide a lead of two to fourteen months, with an average lead of eight months at cycle peaks as determined by the National Bureau of Economic Research. The median lead was also eight months. At business cycle troughs, the CAB leads by one to seven months, with an average lead of four months. The median lead was three months. The CAB is rebased to the average lead (in months) of an average 100 in the base year (the year 2012 was used) of a reference time series. The latter is the Federal Reserve’s Industrial Production Index.
emphasis added 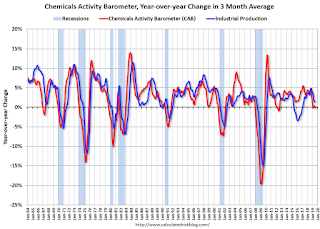 The year-over-year change in the CAB suggests that the YoY increase in industrial production will probably slow further.