The headline jobs number at 135 thousand for September ex-Census (136K total including temp Census hires) was below consensus expectations of 145 thousand, however the previous two months were revised up 45 thousand, combined. The unemployment rate declined to 3.5%; the lowest rate since 1969.

In September, the year-over-year employment change was 2.147 million jobs including Census hires (note: this will be revised down significantly in February with the benchmark revision).

Wage growth was below expectations. From the BLS: 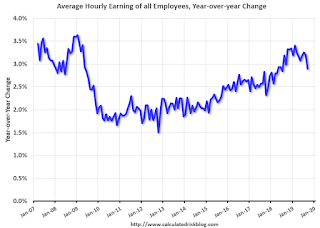 This graph is based on â€śAverage Hourly Earningsâ€ť from the Current Employment Statistics (CES) (aka "Establishment") monthly employment report. Note: There are also two quarterly sources for earnings data: 1) â€śHourly Compensation,â€ť from the BLSâ€™s Productivity and Costs; and 2) the Employment Cost Index which includes wage/salary and benefit compensation.

The graph shows the nominal year-over-year change in "Average Hourly Earnings" for all private employees. Â Nominal wage growth was at 2.9% YoY in September.

Wage growth had been generally trending up, but has weakened recently. 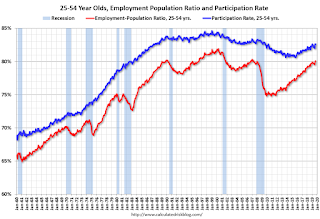 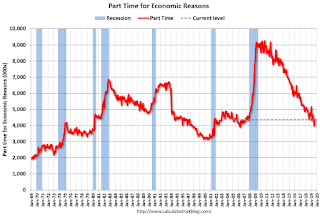 "The number of persons employed part time for economic reasons (sometimes referred to as involuntary part-time workers) was essentially unchanged at 4.4 million in September. These individuals, who would have preferred full-time employment, were working part time because their hours had been reduced or they were unable to find full-time jobs."

These workers are included in the alternate measure of labor underutilization (U-6) that increased to 6.9% in September.Â  This is the lowest level for U-6 since 2000. 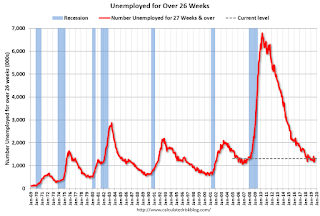 According to the BLS, there are 1.314 million workers who have been unemployed for more than 26 weeks and still want a job. This was up from 1.243 million in August.

This was mixed jobs report. Â

The economy added 1.419 million jobs through September 2019 ex-Census, down from 1.979 million jobs during the same period of 2018 (although 2018 will be revised down with benchmark revision to be released in February 2020). Â  So job growth has slowed.