From HotelNewsNow.com: STR: US hotel results for week ending 25 July

U.S. hotel performance data for the week ending 25 July showed slightly higher occupancy and room rates from the previous week, according to STR.

U.S. occupancy has risen week over week for 14 of the last 15 weeks, although growth in demand (room nights sold) has slowed.

As STR noted, the occupancy rate has increased week-to-week in “14 of the last 15 weeks”. The increases in occupancy have slowed and are well below the level for this week last year of 78%. 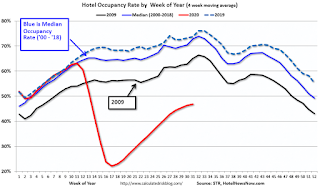 Usually hotel occupancy starts to pick up seasonally in early June and decline towards the end of summer.So some of the recent pickup might be seasonal (summer travel).   Note that summer occupancy usually peaks at the end of July or in early August.

According to STR, the improvement appears related mostly to leisure travel as opposed to business travel.