With the sharp GDP decline in Q2, there have been several comparisons of US numbers to other regions of the world.

First, it is important to understand:

The US reports GDP on a quarter-over-quarter (QoQ) annualized basis.

The EU reports GDP on a QoQ basis (not annualized).

This is just how the data is reported.   There is no conspiracy to make the US look bad in Q2, or look good in Q3.

If we want to compare the US to the EU, we need to convert one of the numbers.   For example, a 32.9% annualized decline is a 9.5% decline QoQ (not annualized).

So we would compare a -9.5% in the US to -11.9% in the EU.  Both were terrible, but also necessary to “bend the curve” and suppress the virus, and the EU decline in GDP was worse.

However, the EU did a much better job of suppressing the virus, and the economic recovery in the EU will probably be better.   As Dr. Fauci noted today (from CNN):

“If you look at what happened in Europe, when they shut down or locked down or went to shelter in place — however you want to describe it — they really did it to the tune of about 95% plus of the country did that,” Fauci said.

However, “when you actually look at what we did, even though we shut down, even though it created a great deal of difficulty, we really functionally shut down only about 50% in the sense of the totality of the country,” Fauci added.

It will be interesting in Q3 to compare the bounce back. My guess is the EU will do better in Q3 since they did a better job of controlling the virus. 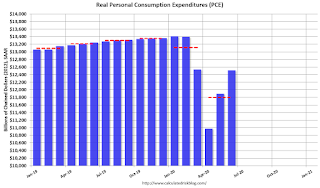 There will be a sharp increase in GDP in Q3 in both the US and the EU.

Note the red line for Q2 (the quarterly level of PCE). Even if PCE stayed at the June level in Q3, there would be 27% increase in Q3!

Trump’s Spending Is Making The US Economic Recovery Harder, Biden Would Make It Even Worse