Previously I wrote: Will State and Local Governments Hire 1 Million Teachers in June and July? No, but …

There will be some weird seasonal adjustments this year!

Every year, state and local governments let about 2 million teachers go in late Spring, and then hire them back at the end of Summer.

Here are a couple of graphs to illustrate what will happen. 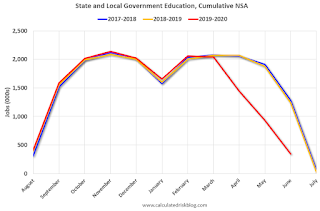 The first graph shows the typical seasonal pattern for state and local government education hiring and layoffs.  The graph is Not Seasonally Adjusted (NSA), and cumulative hires since July.

The typical pattern is a substantially amount of hiring in September, a dip in January, and then a large number of layoffs in June and July.

In the current school year (red), educators were let go earlier than usual due to the pandemic, with layoffs starting in March.   It appears another 350 thousand or more educators will be let go in July NSA. 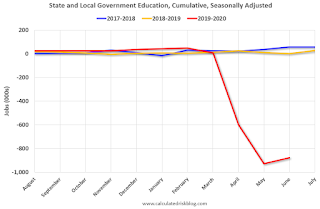 The second graph shows the same three school years, on a seasonally adjusted basis (cumulative since the previous July). Since there is a regular seasonal pattern, the BLS adjusts the hiring so the typical school year hiring and layoffs, Seasonally Adjusted (SA), is mostly flat.

However, in the 2019-2020 school year, layoffs started much earlier.   Now, in July, the red line will have to come back close to zero after the seasonal adjustment.  This would suggest about 850 thousand jobs added in July SA.

Note: There could be more layoffs than usual, NSA, since state and local budgets are under pressure, which would mean fewer than 850 thousands jobs added SA.  But the SA number will still be large.

Just something to remember when looking at the headline employment number.

A Return to Safety?