The Cleveland Fed released the median CPI and the trimmed-mean CPI this morning:

According to the Federal Reserve Bank of Cleveland, the median Consumer Price Index rose 0.3% August. The 16% trimmed-mean Consumer Price Index rose 0.3% in August. “The median CPI and 16% trimmed-mean CPI are measures of core inflation calculated by the Federal Reserve Bank of Cleveland based on data released in the Bureau of Labor Statistics’ (BLS) monthly CPI report”.

Note: The Cleveland Fed released the median CPI details for August here. Used cars and trucks increased at a 88% annualized rate in August. 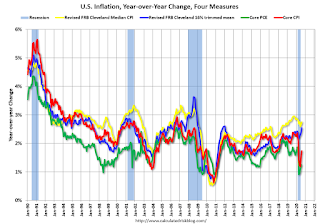 Even with the increases in inflation in July and August, overall inflation will not be a concern during the crisis.

The Role Of Gold In Surviving A Global Economic Abyss