Expectations are there will be no change to policy when the FOMC meets this week.

Here are some comments from Goldman Sachs economist David Mericle:

The Fed concluded its framework review between meetings with the adoption of a new flexible average inflation targeting strategy in August. We expect the FOMC to modify its post-meeting statement to recognize the new approach by replacing the current reference to its “symmetric 2 percent inflation objective” with a reference to “inflation that averages 2% over time.”

The Summary of Economic Projections is likely to show large upgrades to the growth and unemployment forecasts in recognition of the surprisingly strong data over the last few months. But we expect that the median projection will still show an unemployment rate modestly above the longer-run rate and inflation just below 2% even at the end of the forecast horizon in 2023, a bit short of the conditions that we expect to eventually trigger liftoff.

For review, here are the June FOMC projections.  Projections will be updated at this meeting and there will be substantial changes to GDP, the unemployment rate, and inflation projections.

The following graph illustrates this decline. 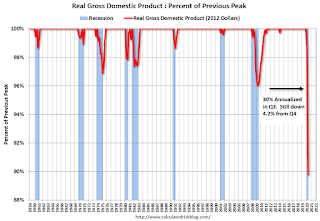 The black arrow shows what a 30% annualized increase in real GDP would look like in Q3.

Note that the unemployment rate doesn’t remotely capture the economic damage to the labor market.  Not only are there almost 14 million people unemployed, close to 4 million people have left the labor force since January.  And millions more are being supported by various provisions for the CARES Act – that hasn’t been renewed

The unemployment rate will be revised down for all three years.

Projections will change significantly this month, with GDP being revised up for 2020, and the unemployment rate revised down. Inflation will also be revised up.