From the Fed: Industrial Production and Capacity Utilization

Industrial production rose 0.4 percent in August for its fourth consecutive monthly increase. However, even after the recent gains, the index in August was 7.3 percent below its pre-pandemic February level. Manufacturing output continued to improve in August, rising 1.0 percent, but the gains for most manufacturing industries have gradually slowed since June. Mining production fell 2.5 percent in August, as Tropical Storm Marco and Hurricane Laura caused sharp but temporary drops in oil and gas extraction and well drilling. The output of utilities moved down 0.4 percent. At 101.4 percent of its 2012 average, the level of total industrial production was 7.7 percent lower in August than it was a year earlier. Capacity utilization for the industrial sector increased 0.3 percentage point in August to 71.4 percent, a rate that is 8.4 percentage points below its long-run (1972–2019) average but 7.3 percentage points above its low in April.
emphasis added 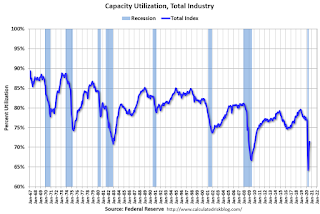 This graph shows Capacity Utilization. This series is up from the record low set in April, but still well below the level in February 2020. 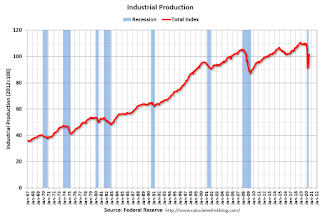