Mortgage applications decreased 0.5 percent from one week earlier, according to data from the Mortgage Bankers Association’s (MBA) Weekly Mortgage Applications Survey for the week ending November 6, 2020.

“Mortgage application activity was mixed last week, despite the 30-year fixed rate decreasing to 2.98 percent – an all-time MBA survey low. The refinance index climbed to its highest level since August, led by a 1.5 percent increase in conventional refinances,” said Joel Kan, MBA’s Associate Vice President of Economic and Industry Forecasting. “The purchase market continued its recent slump, with the index decreasing for the sixth time in seven weeks to its lowest level since May 2020. Homebuyer demand is still strong overall, and activity was up 16.5 percent from a year ago. However, inadequate housing supply is putting upward pressure on home prices and is impacting affordability – especially for first-time buyers and lower-income buyers. The trend in larger average loan application sizes and growth in loan amounts points to the continued rise in home prices, as well as the strength in the upper end of the market.”
…
The average contract interest rate for 30-year fixed-rate mortgages with conforming loan balances ($510,400 or less) decreased to a survey low of 2.98 percent from 3.01 percent, with points decreasing to 0.35 from 0.38 (including the origination fee) for 80 percent loan-to-value ratio (LTV) loans.
emphasis added 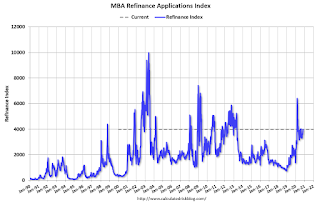 But with record low rates, the index remains up significantly from last year. 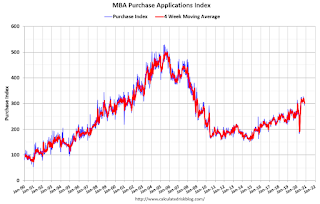 According to the MBA, purchase activity is up 16% year-over-year unadjusted.