Manufacturing activity in the region continued to grow, according to firms responding to the November Manufacturing Business Outlook Survey. The survey’s current indicators for general activity, new orders, and shipments remained positive for the sixth consecutive month but fell from their readings in October. However, employment increases were more widespread this month. Most future indexes also moderated this month but continue to indicate that firms expect growth over the next six months.

This was close to the consensus forecast.

Here is a graph comparing the regional Fed surveys and the ISM manufacturing index: 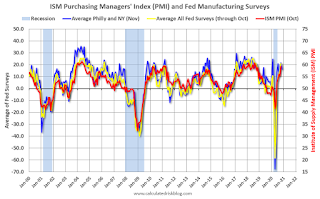 These early reports suggest the ISM manufacturing index will still be solid, but will likely decrease slightly in November from the October level.

Currencies in the Face of “Disaster”