Note: Week-over-week case growth has slowed, and will probably show a decline over the holiday weekend. However, it is likely that cases will pickup again the following week. Stay Safe!!!

The US is now averaging over 1 million tests per day. Based on the experience of other countries, for adequate test-and-trace (and isolation) to reduce infections, the percent positive needs to be well under 5% (probably close to 1%), so the US still needs to increase the number of tests per day significantly (or take actions to push down the number of new infections).

Almost 31,000 US deaths have been reported so far in November. See the graph on US Daily Deaths here. 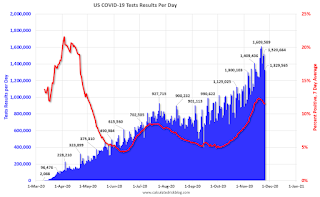 This data is from the COVID Tracking Project.

And check out COVID Exit Strategy to see how each state is doing. 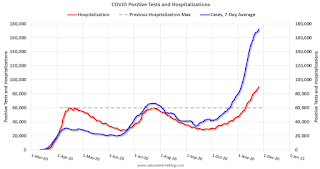 The dashed line is the previous hospitalization maximum.

Note that there were very few tests available in March and April, and many cases were missed, so the hospitalizations was higher relative to the 7-day average of positive tests in July.

• 7-day average cases are at a new record.

• 7-day average deaths at highest level since May.

Enbridge Sues To Stop Michigan From Shutting Down Pipeline