Existing-home sales rose in December, with home sales in 2020 reaching their highest level since 2006, according to the National Association of Realtors®. Activity in the major regions was mixed on a month-over-month basis, but each of the four areas recorded double-digit year-over-year growth in December.

Total existing-home sales, completed transactions that include single-family homes, townhomes, condominiums and co-ops, increased 0.7% from November to a seasonally-adjusted annual rate of 6.76 million in December. Sales in total rose year-over-year, up 22.2% from a year ago (5.53 million in December 2019).
…
Total housing inventory at the end of December totaled 1.07 million units, down 16.4% from November and down 23% from one year ago (1.39 million). Unsold inventory sits at an all-time low 1.9-month supply at the current sales pace, down from 2.3 months in November and down from the 3.0-month figure recorded in December 2019. NAR first began tracking the single-family home supply in 1982.
emphasis added 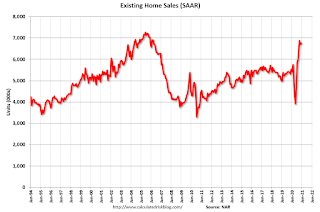 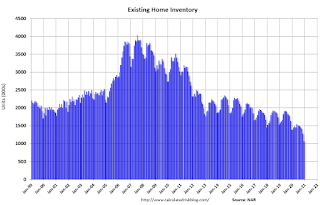 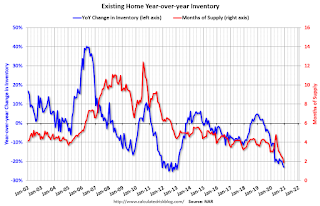 Inventory was down 23% year-over-year in December compared to December 2019.

Months of supply decreased to 1.9 months in December (an all time low).