The reason I’m posting COVID data is this matters for the economy. From the FOMC statement today:

“The path of the economy will depend significantly on the course of the virus, including progress on vaccinations.“

It appears the 7-day average cases has peaked. Stay safe! I’m looking forward to not posting this data soon.

“Vaccinations in the U.S. began Dec. 14 with health-care workers, and so far 25.6 million shots have been given, according to a state-by-state tally by Bloomberg and data from the Centers for Disease Control and Prevention. In the last week, an average of 1.21 million doses per day were administered.”

Also check out the graphs at COVID-19 Vaccine Projections The site has several interactive graphs related to US COVID vaccinations including a breakdown of how many have had one shot, and how many have had both shots.

Almost 83,000 US deaths have been reported so far in January, surpassing December as the deadliest month. See the graph on US Daily Deaths here. 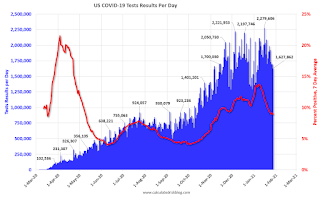 This data is from the COVID Tracking Project.

And check out COVID Act Now to see how each state is doing. (updated link to new site) 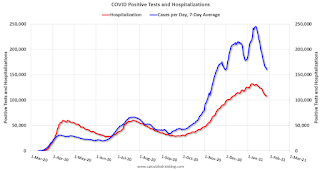 It seems likely cases and hospitalizations have peaked, but are declining from a very high level.