The FDIC released the Quarterly Banking Profile for Q4 2020 today:

For the commercial banks and savings institutions insured by the Federal Deposit Insurance Corporation (FDIC), aggregate net income totaled $59.9 billion in fourth quarter 2020, an increase of $5 billion (9.1 percent) from a year ago. The improvement in quarterly net income was led by a reduction in provision expenses. Financial results for fourth quarter 2020 are included in the FDIC’s latest Quarterly Banking Profile released today.
…
The Deposit Insurance Fund’s Reserve Ratio Declined from the Previous Quarter to 1.29 Percent: The Deposit Insurance Fund totaled $117.9 billion in the fourth quarter, up $1.5 billion from the third quarter. The quarterly increase was led by assessment revenue and interest earned on investment securities held by the fund. The reserve ratio declined by 1 basis point from the previous quarter to 1.29 percent solely as a result of strong estimated insured deposit growth.

Mergers and New Bank Openings Continued in the Fourth Quarter: During the fourth quarter, three new banks opened, 31 institutions were absorbed through mergers, and two banks failed. 5,001 commercial banks and savings institutions filed fourth quarter Call Reports and are insured by the Federal Deposit Insurance Corporation (FDIC) as of December 31, 2020. … The number of institutions on the FDIC’s “Problem Bank List” remained unchanged from the previous quarter at 56. Total assets of problem banks increased from $53.9 billion in third quarter 2020 to $55.8 billion in fourth quarter 2020.
emphasis added 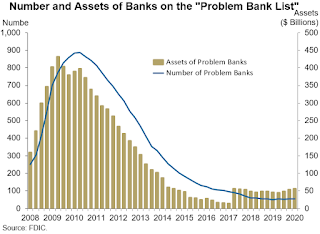 The FDIC reported the number of problem banks was unchanged.

This graph from the FDIC shows the number of problem banks was unchanged at 56 institutions.

Note: The number of assets for problem banks increased significantly back in 2018 when Deutsche Bank Trust Company Americas was added to the list (it must still be on the list given the assets of problem banks). 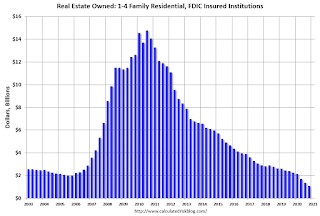 The dollar value of 1-4 family residential Real Estate Owned (REOs, foreclosure houses) declined from $2.27 billion in Q4 2019 to $1.11 billion in Q4 2020. This is the lowest level of REOs in many years.  (probably declined sharply due to foreclosure moratoriums and forbearance programs).

This graph shows the nominal dollar value of Residential REO for FDIC insured institutions. Note: The FDIC reports the dollar value and not the total number of REOs.

TSX Takes it on Chin