Adding an exclamation point to a year unlike any other, home prices continued their powerful surge higher in December, setting the stage for more strong growth in the months ahead.
…
The factors that have, for months, stoked competition for homes remained firmly in place in December. A wave of eager buyers – many of whom are looking to enter the market for the first time – sought to capitalize on record-low mortgage rates and snap up the relatively few homes available for sale, leading homes to fly off the shelves and prices to continue to grow. In some major markets, homes are going under contract more than a month faster than they were this time last year. This forces would-be buyers to move very quickly to put an offer in on a home they desire, increases the likelihood that multiple offers will be fielded by the seller and ultimately places more upward pressure on prices. Looking ahead, with mortgage rates remaining relatively low and the wave of eager buyers continuing to swell, it’s unlikely that this competition for housing, and subsequent strong price appreciation, will meaningfully abate in the near future.

Monthly growth in January as reported by Case-Shiller is expected to slow slightly from December in all three main indices, while annual growth is expected to accelerate across the board. S&P Dow Jones Indices is expected to release data for the January S&P CoreLogic Case-Shiller Indices on Tuesday, March 30.
emphasis added 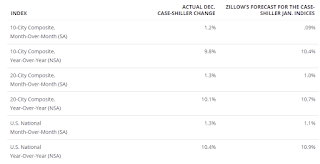 The Zillow forecast is for the year-over-year change for the Case-Shiller National index to be at 10.9% in January, up from 10.4% in December.

Banks at 52-Week Highs on News