On Friday at 8:30 AM ET, the BLS will release the employment report for February. The consensus is for 148 thousand jobs added, and for the unemployment rate to increase to 6.4%. 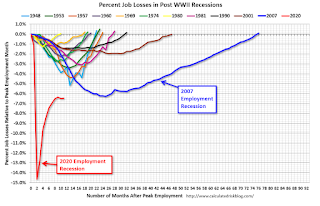 • First, currently there are still almost 10 million fewer jobs than in February 2020 (before the pandemic).

The current employment recession is by far the worst recession since WWII in percentage terms, and is still worse than the worst of the “Great Recession”.

• ADP Report: The ADP employment report showed a gain of 117,000 private sector jobs, below the consensus estimate of 168 thousand jobs added.  The ADP report hasn’t been very useful in predicting the BLS report, but this suggests the BLS report could be weaker than expected.

• Weather: Weather is a wildcard every year during the winter. A harsh winter can lead to a weak jobs report, and the weather in February 2021 was especially harsh. However, most of the extreme weather was after the BLS reference week (the major winter storm started on the 13th). After the report is released, the SF Fed will update their Weather-Adjusted Employment Change 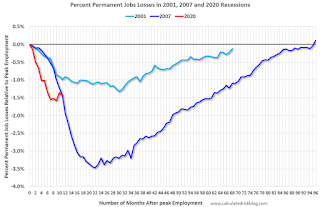 This graph shows permanent job losers as a percent of the pre-recession peak in employment through the December report.

This data is only available back to 1994, so there is only data for three recessions. In January, the number of permanent job losers increased to 3.503 million from 3.370 million in December.

• Conclusion: Most of the indicators suggest a stronger report in February than in January (only 49 thousand jobs were added in January). My guess is the report will be close to the consensus (weather is a wildcard).

Looking Toppy, Value > Growth, There Will Be A Powerful Bounce