Currently “For Sale” housing inventories are at record low levels. What could lead to more supply in the short term?

Here are the organic reasons.

First, as the pandemic subsides, potential sellers will be more willing to list their homes (and allow strangers into their homes).  So I expect more inventory later this year (See Some thoughts on Housing Inventory)

Second, an increase in mortgage rates (if this continues) would likely slow demand (usually demand picks up when interest rates first start to increase, as buyers are afraid of missing out on low rates).  But if 30 year fixed rate mortgages move up closer to 4% (from the current 3.34%), this will probably slow demand.

Third, homebuilders are responding to demand, and ramping up production.
What else could lead to more supply?
Government policy could help.
In many higher priced areas, people stay in their large homes to avoid paying capital gains.   A one time waiving of all capital gains on a primary residence (for seniors), would bring more supply to the market.   These seniors could then move down or into retirement communities.
Some people would argue this would only help wealthier people, but that is incorrect. 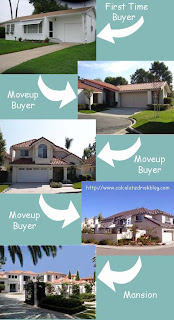 Supply at the higher end, would allow people to move up – and that would free up mid-level homes, and down the housing chain.  (See this post from 2009 on the housing chain)
I put this graphic together in 2007 to explain the missing move up buyer, but it would also apply if we could free up higher end homes.
Another policy that would help would be to offer a tax break to landlords of single family homes and condos, if they sell a rental property this year.
A large number of single family home and condos were converted to rental units. In 2015, housing economist Tom Lawler estimated there were 17.5 million renter occupied single family homes in the U.S., up from 10.7 million in 2000. Many of these houses were purchased by investors. Most of these rental conversions were at the lower end, and that limited the supply for first time buyers.
A limited time tax break for these landlords would free up homes for first time buyers.
I expect inventory to increase later this year, but policy could help.
previous post

Calix price target raised to $52 from $40 at Jefferies

From wood to oil