This does not include the 151,752 initial claims for Pandemic Unemployment Assistance (PUA) that was down from 237,065 the previous week. 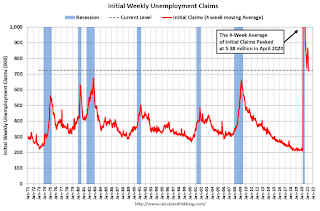 The dashed line on the graph is the current 4-week average. The four-week average of weekly unemployment claims increased to 723,750.

Weekly claims were higher than the consensus forecast.

IMF Warns Governments Against Taking On Too Much Debt