The BEA released the underlying details for the Q1 advance GDP report on Friday.

Investment in petroleum and natural gas structures increased sharply in Q1 compared to Q4, but was still down 40% year-over-year. 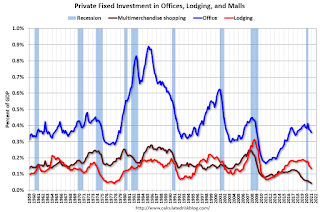 The first graph shows investment in offices, malls and lodging as a percent of GDP.

Investment in offices (blue) decreased in Q1, and was down 4.5% year-over-year.

Investment in multimerchandise shopping structures (malls) peaked in 2007 and was down about 28% year-over-year in Q1 – and at a record low as a percent of GDP.   The vacancy rate for malls is still very high, so investment will probably stay low for some time.

All three sectors – offices, malls, and hotels – are being hurt significantly by the pandemic. 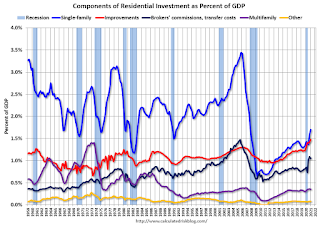 The second graph is for Residential investment components as a percent of GDP. According to the Bureau of Economic Analysis, RI includes new single family structures, multifamily structures, home improvement, Brokers’ commissions and other ownership transfer costs, and a few minor categories (dormitories, manufactured homes).

Investment in home improvement was at a $325 billion Seasonally Adjusted Annual Rate (SAAR) in Q3 (about 1.5% of GDP).  Home improvement spending has been strong during the pandemic.

Note that Brokers’ commissions (black) increased sharply as existing home sales increased in the second half of 2020, and was up 26% year-over-year in Q1.
previous post

How To: Auditing Clients’ Financial Plans

Charlie Munger’s Disdain Toward Bitcoin Intensifies, Calls it “Disgusting and Contrary to the Interests of Civilization”