Note: This is even lower than housing economist Tom Lawler’s projection, see: Lawler: The Dismal Demographics of 2020. Demographics are still positive for housing, but nothing like the projections from a decade ago.

I’ll have more on this as the 2020 Census data is released.

From the National Center for Health Statistics: Births: Provisional Data for 2020. The NCHS reports:

Here is a long term graph of annual U.S. births through 2020. 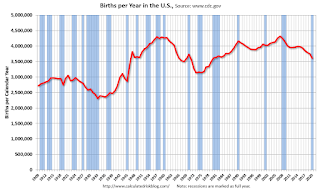 Births have declined for six consecutive years following increases in 2013 and 2014.

With fewer births, and less net migration, demographics are not be as favorable as once expected.

There is much more in the report.