This gives a total of 5.01% delinquent or in foreclosure.

Today, the Data & Analytics division of Black Knight, Inc. released its latest Mortgage Monitor Report, based upon the company’s industry-leading mortgage, real estate and public records datasets. Considering recently updated forbearance expiration timelines announced by FHFA, FHA, VA, and USDA, this month’s report looks at the impact of the many varying allowable forbearance periods. According to Black Knight Data & Analytics President Ben Graboske, due to the complexity of the expiration matrices across different agencies, the operational challenge mortgage servicers were already facing this fall has been compounded even more.

“Prior to the agencies issuing clarifying guidance on allowable forbearance periods, some 950,000 plans were set to expire over the final six months of the year – representing about half of all loans in forbearance,” said Graboske. “That estimate assumed a blanket 18-month maximum allowable forbearance period. However, now we have detailed matrices of differing forbearance periods across the various agencies. Depending upon the specific agency and when forbearance was initially requested by the homeowner, a plan can have a 6-, 12-, 15- or 18-month limit. Assuming borrowers stay in for the maximum allowable term, this means plans that started as much as seven months apart are now scheduled to expire simultaneously, frontloading expirations of forbearance plans sooner than estimated.

“As a result, 65% of active plans – representing approximately 1.2 million homeowners – are now set to expire over the rest of 2021, including nearly 80% of all FHA and VA loans in forbearance. Nearly three quarters of a million plans would expire in September and October alone. Over the course of just two months this fall, the nation’s mortgage servicers would have to process up to approximately 18,000 expiring plans per business day, guiding borrowers through complex loss mitigation waterfalls directed by changing regulatory requirements. The operational challenge this represents is staggering, even before noting the oversized share of FHA and VA loans. Given the heightened challenges those borrowers may face in returning to making mortgage payments as compared to those in GSE loans, effective loss mitigation efforts and automated processes become even more critically important.”
emphasis added 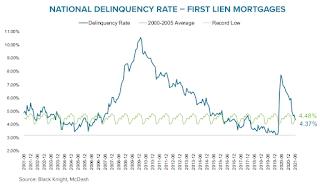 • After a calendar-related setback in May, mortgage delinquencies returned to their trend of improvement in June, falling to 4.37% from 4.73% the month prior

• The national delinquency rate is now back below its 2000-2005 pre-Great Recession average for this time of year and currently stands 1.17 percentage points above the record low reached just before the onset of the pandemic

• While the overall delinquency rate remains on pace to return to pre-pandemic levels by early 2022, serious delinquencies continue to improve at a much slower rate 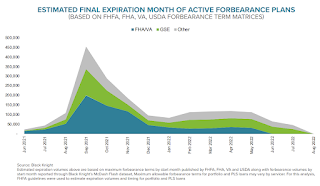 And on estimated expiration of forbearance plans from Black Knight:

• Prior to the clarifying guidance on allowable forbearance periods, Black Knight had estimated some 950K plans were set to expire over the final six months of the year – representing about half of all loans in forbearance

• However, under the current matrices 65% of active plans – representing approximately 1.2 million homeowners – are now set to expire over the rest of 2021, including nearly 80% of all FHA and VA loans in forbearance

• While some borrowers will elect to leave forbearance early between now and their final expiration, servicers are still facing significant operational challenges, especially with FHA loans which may take additional processing time due to the complexities of post-forbearance workouts

• Under the current matrices, the nation’s mortgage servicers would have to process up to 18K expiring plans per business day in September and October alone, guiding borrowers through complex loss mitigation waterfalls directed by changing regulatory requirements

Fly Intel: What to watch in Under Armour earnings report